From maletsky
Jump to navigation Jump to search
This site is dedicated to the descendants of Pawel Malecki and Agnes Rachowski. Let us always strive for prosperity, happiness and kindness.

Keep a record of your family ancestry. It's Free!
***Click on your Last Name. At the top of the page.*** 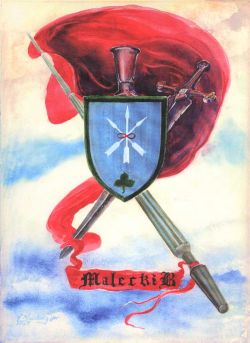 Family coat of arms created by Paul John Maletsky
✅ The cloak of forgiveness. Forgiven not forgotten.
✅ The shield against evil and those who maliciously deprive.
✅ The lance and sword to vanquish the oppressors and bullies.
✅ The arrows symbolizes the power of life through eternity.
✅ the 3 leaf clover represents the Holy Trinity.
✅ the infinity symbol stands for Universal Stewardship

I want to thank Bob Malesky and Evan Merle Maletsky for helping me open the flood gate of information that is now coming in from members of the family. More recently I want to thank my new found cousin out of Poland, Pawel Rachowski who provided me with additional information about the Malecki family. This site is dedicated to the Maletsky Genealogy.

Pawel (Paul) Malecki was born in 1787 in Miedzna, Poland. Paul married Agnes Rachowski. The name "Rachowski" is very old and can be traced back to the year 1470. The couple had two children; a son named Szymon, born in October 24, 1835 in Miedzno, Poland and a daughter named Marianna, born in January 19, 1839. Bogumil Rachowski (could be Agnes's brother) was Marianna's godfather. There are no other records available about Marianna.

From the Roman Catholic parish of Rossoszyca (Sieradz county), Miedzno (Village) of 1808 - 1844 it shows that both Agnes & Pawel Malecki were foresters. Szymon married Vincenzia Fogler (a widow of deceased husband: Piotr Mildner) in November 7, 1856.

Marriage records show that he was 24 and she was 25. Vincenzia was born in 1831 in Nackotny, Czeckoslavakia. Records show that the parents of Vincenzia were Anton Fogler and Vincenzia Borowkow. Anton Fogler was born in 1805 and died in 1842. The Roman Catholic parish of Zdunska Wola, Poland records of 1808 through 1875 show that at the time of Szymon's marriage his occupation was that of a "weaver". Szymon passed on his skill as a weaver to his children. 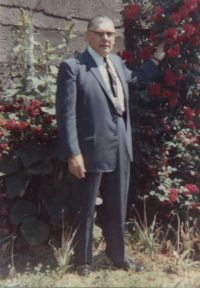 Here is a picture of Boleslaw Maletsky, proud of his roses.

Amelia died shortly after her third child, Aurelia "Laura". Anton then married again for the third time to Pauline Conrad on April 20, 1897. Anton and Pauline had three children. Bob writes, "Anton was the first of the Malecki brothers to come to America, which he did in 1902. Josef Malecki immigrated in 1907 with his whole family and they settled in Allentown, Pennsylvania. We do not know when or if Romuald immigrated, but Boleslaw Maletsky (son of Romuald) does turn up in the Allentown city directory in 1914. By this time, all the families were using the spelling the officials at Ellis Island had given them - Maletsky".

Evan writes, "It appears that Anton came over here first in 1902, probably to size things up, with $14.00 to his name. He returned in 1903 with his family and $25.00, staying first with Pauline's sister and brother-in-law, Mary and Berthold Ewert in New York City."

The ship's register from the SS Patricia, which sailed from Hamburg, Germany on December 25, 1903 and arrived in New York at Ellis Island on January 11, 1904 shows Benjamin Maletsky to be 8 years, 4 months old. His younger brother Otto was 3 years, 6 months.

The ship's register spelled the last name as Malecki. According to Bob the "c" in Polish is pronounced like a : "ts", hence the pronunciation was "Maletsky".

The Malecki family were very skilled weavers. Josef and Anton listed their occupation as weavers when they immigrated. Sebastian, the son of Josef was a silk-ribbon weaver all his working life. Patterson, New Jersey (near Pompton Lakes) was one of America's main textile centers at the turn of the century. Allentown, PA was another. That is why the families settled there.

10 Health Habits That Will Help You Live to 100


The biggest factor that determines how well you age is not your genes but how well you live. Not convinced? A new study published in the British Medical Journal of 20,000 British folks shows that you can cut your risk of having a stroke in half by doing the following four things: being active for 30 minutes a day, eating five daily servings of fruit and vegetables, and avoiding cigarettes and excess alcohol.

While those are some of the obvious steps you can take to age well, researchers have discovered that centenarians tend to share certain traits in how they eat, move about, and deal with stress—the sorts of things we can emulate to improve our own aging process. Of course, getting to age 100 is enormously more likely if your parents did. Still, Thomas Perls, who studies the century-plus set at Boston University School of Medicine, believes that assuming you've sidestepped genes for truly fatal diseases like Huntington's, "there's nothing stopping you from living independently well into your 90s." Heck, if your parents and grandparents were heavy smokers, they might have died prematurely without ever reaching their true potential lifespan, so go ahead and shoot for those triple digits by following these 10 habits.

Using this genealogy site is the best way to keep your family records on line and available to other members of the family. Maletsky.org is the free way of keeping your family tree growing with relevant information.

I want to share the wisdom of George Carlin with you. So much humor, so much truth. This is his view on AGING.

IF YOU DON'T READ THIS TO THE VERY END, YOU HAVE LOST A DAY IN YOUR LIFE. AND WHEN YOU HAVE FINISHED, DO AS I AM DOING, SHARE IT.

Do you realize that the only time in our lives when we like to get old is when we're kids? If you're less than 10 years old, you'r e so excited about aging that you think in fractions.

'How old are you?' 'I'm fourand a half!' You're never thirty-six and a half. You're four and a half, going on five! That's the key

You get into your teens, now they can't hold you back. You jump to the next number, or even a few ahead.

But then you turn 30. Oooohh, what happened there? Makes you sound like bad milk! He TURNED; we had to throw him out. There's no fun now, you're Just a sour-dumpling. What's wrong? What's cha nged?

You BECOME 21, you TURN30, then you're PUSHING 40. Whoa! Put on the brakes, it's all slipping away. Before you know it, you REACH 50 and your dreams are gone.

You've built up so much speed that you HIT 70! After that it's a day-by-day thing; you HIT Wednesday!

HOW TO STAY YOUNG

AND ALWAYS REMEMBER : Life is not measured by the number of breaths we take,but by the moments that take our breath away.

Share this with someone. We all need to live life to its fullest each day!! Have a great Zwiki day.

I found this great article from Regina Brett and we are sharing it with you.
Written By Regina Brett
of The Plain Dealer, Cleveland , Ohio

"To celebrate growing older, I once wrote the 45 lessons life taught me. It is the most-requested column I've ever written."

"It is not the strongest of the species that survive, nor the most intelligent, but the one most responsive to change." — Charles Darwin